The terms horns and antlers are often used interchangeably, but in reality, they refer to quite different structures. Antlers are a pair of bony, branched structures that protrude from the frontals of the skull of animals and are shed annually; horns are also paired and protrude from the frontals, but they are permanent, unbranched, and made up of a bony core and a keratinized sheath.

Antlers are one of the most easily recognized characteristics of the family Cervidae. They are present only in males (with the exception of caribou) and are capable of growing astoundingly large. Their morphology varies among species. Antlers grow from pedicels, which are bony supporting structures that develop in the lateral region of the frontal bones.

The growth cycle is regulated by testicular and pituitary hormone. Secretions from the pituitary initiate the growth in April or May. In the northern hemisphere increasing day length also plays a role. Early in their development, antlers have high water and protein content. As they grow, antlers are covered with skin and soft hair called velvet, which carries blood vessels and nerves. 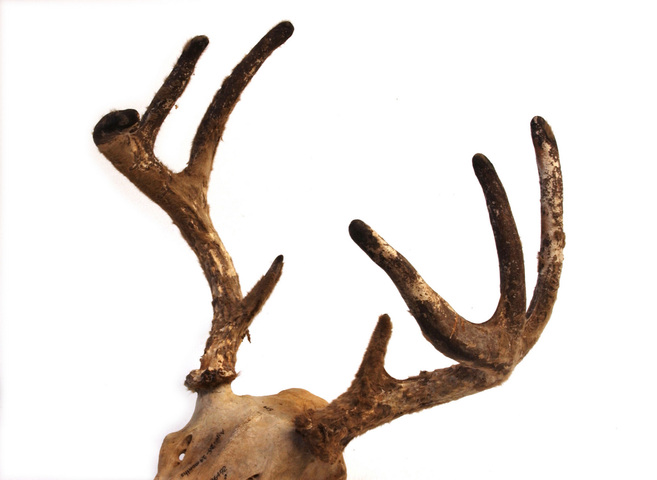 As antlers near the end of the growing process, spongy bone in their outer edges is replaced by compact bone, while their centers become filled with coarse, spongy, lamellar bone and marrow spaces. The velvet dies and is removed in part by the animals rubbing and thrashing their antlers against vegetation. The antlers also are stained during this action, giving them the brown, polished, wooden look. 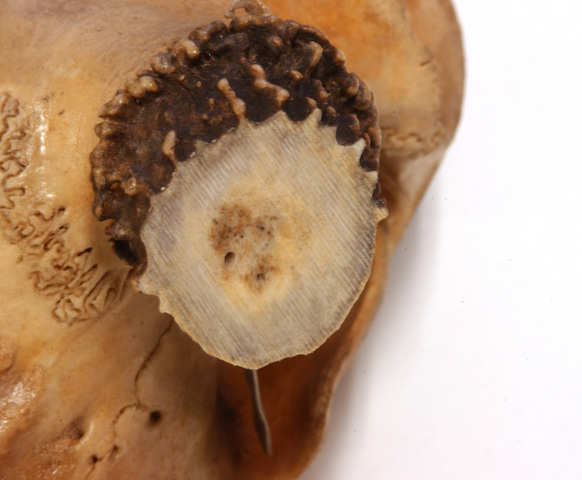 Males use their full-grown antlers during the breeding season in social interactions in competition for females. In winter, pituitary antler-growth hormone stimulation decreases as day length shortens, and androgen secretion lessens. As a result, the pedicel loses calcium, weakening the point of connection between it and the antler, and eventually the antlers are shed. Males then are without antlers for a few months in late winter until the cycle begins again. Curiously, some cervids have large canine teeth, which are used in sexual displays and fighting. Often species with large canines have small antlers or are missing antlers altogether. 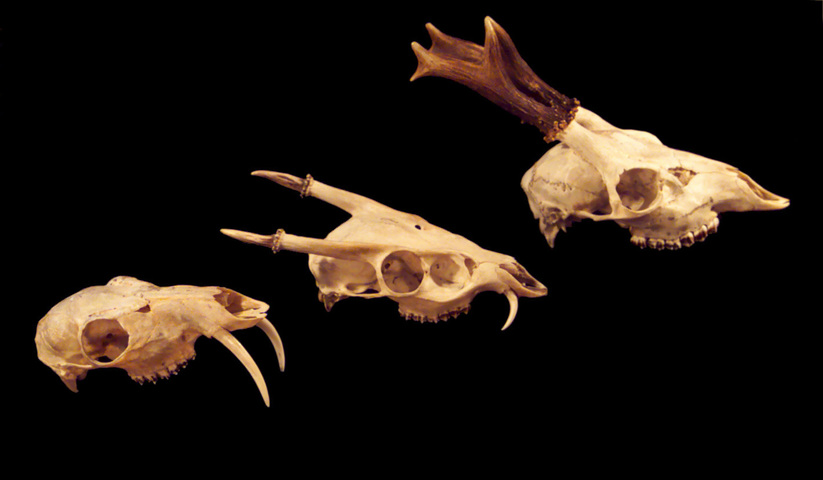 Horns occur in males of all species of Bovidae, and females often bear them too. Horns are composed of a bony core covered with a sheath of keratin. Unlike antlers, horns are never branched, but they do vary from species to species in shape and size. 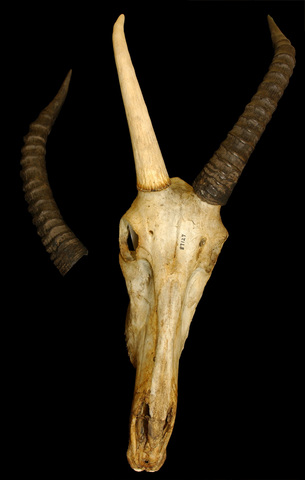 The growth of horns is completely different from that of antlers. Neither the sheath nor the core are ever shed, and in many species, the horns never stop growing. Horn cores begin as small bony growths under the skin, over the skull, in the subcutaneous connective tissue. They are not attached to the skull and are known as ossicones. They possess their own centers of ossification and fuse secondarily to the skull bones. In members of the family Bovidae, horns develop from or over the frontals.

Similar to antlers, horns are often used by males in fights and displays during the breeding season. These fights often include clashes that determine body strength. In general (but with many exceptions), horns are present in both sexes of larger species but absent in females of smaller species. This is probably because larger species are more likely to fight whereas smaller species tend to run and/or hide. In species where members of both sexes have horns, some degree of sexual dimorphism is usually the rule. Horns on males are thicker at the base and able to withstand more force. On females they are straighter and thinner, which may make them better for stabbing (defensive weapons).

Giraffe horns are paired, short, unbranched, permanent, bony processes that are covered with skin and hair. They differ from other artiodactyl horns in that they do not project from the frontal bones, but lie over the sutures between the frontal and parietal bones. Giraffe horns begin as cartilaginous structures in the fetus and may not fuse to the cranium until the animal is 4 years old. Horns are present in both sexes of giraffes and even on newborns. 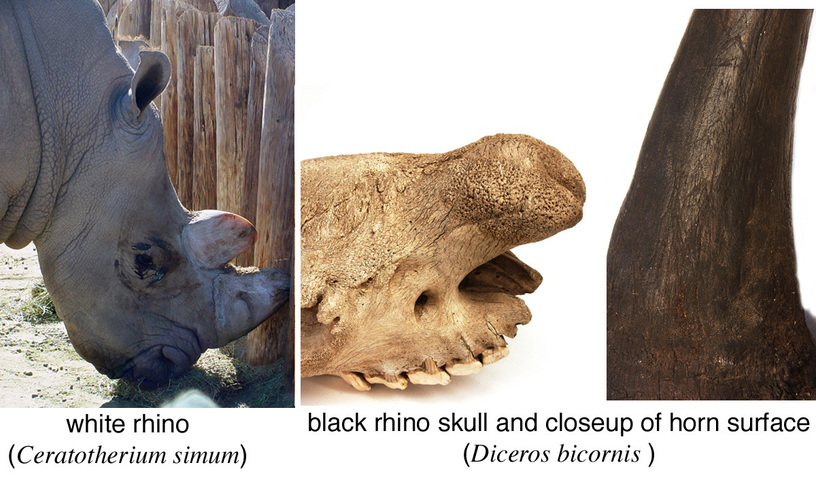 Rhino horns differ from true horns because these horns have no core or sheath. They are made up of multitude of epidermal cells and bundles of dermal papillae, extensions of the dermis. Cells from each papilla form a horny fiber similar to thick hair. These fibers, which are held together by the mass of epidermal cells, are not true hairs. True hair grows from follicles that extend into the dermis, whereas rhino horns grow from dermal papillae which extend up into the horn. The rhino horn is situated over the nasal bones. In species that have two horns, the second horn lies over the frontal bones. Rhino horns commonly curve posteriorly. 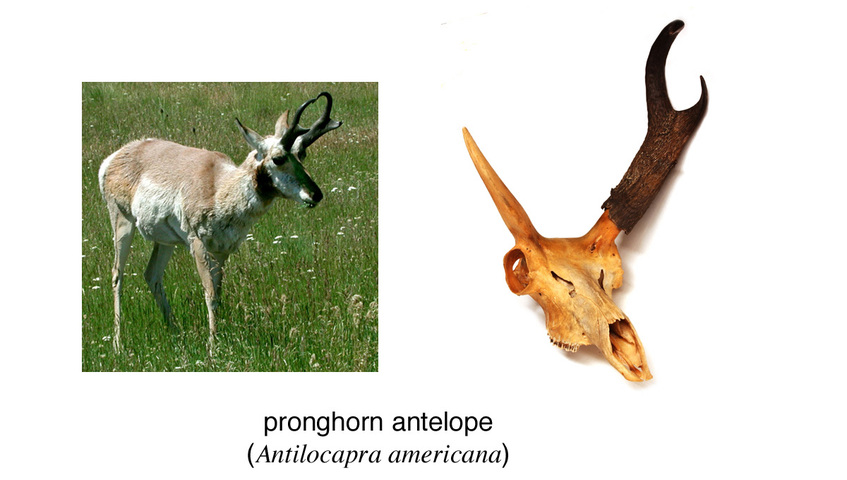 Pronghorn antelope, in the North American family Antilocapridae, have distinctive upright horns. They differ from the horns of bovids in two important respects. First, they are branched. Each has a short, posteriorly-directed branch near the base, and a short, anteriorly-directed hook near the tip. Second, while the horns consist of a bony core and keratinous sheath like those of bovids, the sheaths are shed annually. In bovids, the sheaths are always a permanent part of the horn.