Differentiation of teeth in an individual

We recognize four basic kinds of teeth in an individual's jaw, the incisors, canines, premolars, and molars. These are shown in the illustration at the bottom of this page.

Incisors -- These are the most anterior teeth. Primitively, eutherian mammals had three incisors in each quadrant (we refer to four quadrants when describing teeth: right side of the upper jaw, left side of the upper jaw, right side of the lower jaw, and left side of the lower jaw), while marsupials had five in each upper quadrant and four in each lower (modern monotremes have no adult teeth). Incisors are usually simple teeth, though the crown is sometimes lobed. In many species, incisors are used as pincers for grasping or picking, both in feeding and in grooming.

Incisors have been modified in a number of ways. Perhaps the most successful is their enlargement to form chisels used for gnawing. These chisel incisors are often reduced in number and followed by a conspicuous toothless gap (diastema). By far the most successful group of mammals (at least in terms of number of species!), the rodents, use their incisors in this manner, but chisel-like incisors followed by a diastema are also seen, for example, in lagomorphs (rabbits and pikas), hyraxes, some primates (e.g., the aye-aye; also in an extinct group, the plesiadapids), and in some members of a large, rodent-like group of early mammals (now extinct) called the multituberculates.

Other modifications of incisors include the scalpel incisors of vampire bats, the tusks of elephants, the shovel-like lower incisors of hippos, and the lateral (third) incisors of some carnivores, such as bears, which resemble small stabbing canine teeth.

Canines -- All mammals have a single canine in each quadrant, if they have canines at all. These teeth are often absent; they are never found in modern rodents, for example, and many artiodactyls have them only in the lower jaw. When present, the canines are the first tooth in the maxilla. They tend to be moderately to very long, and most commonly they consist of a single cusp with one root (but there are exceptions). Canines are most often used for stabbing and holding prey, and it is in herbivorous species that they are often reduced in size or missing altogether (for example, in bovid artiodactyls the upper canines are missing and the lower are small and incisor-like).

Canines are used by some species as weapons in social displays or fighting. Such species often have spectacularly enlarged canines (e.g., musk deer, narwhale, babyrousa, baboons), and in many the canines are larger in males than in females. They may be advertised by distinctive color patterns (musk deer, for example, have a patch of dark fur on their lower jaws, over which the huge canines pass) or displays (e.g., the amazing "yawn" of a threatening baboon).

Premolars -- The premolars lie immediately posterior to the canines. In the upper jaw, they are found in the maxillary. They vary considerably in shape and size, from a tiny peg in the mouth of a shrew to a massive crushing or slicing organ in a sea otter or wolf. Premolars are usually, but not always, slightly smaller and simpler than the molars that follow them. They are distinguished from molars because premolars are deciduous; that is, there is a milk set that is later replaced by an adult set. Molars are not replaced; they exist only as adult teeth. Primitive eutherians are believed to have had four premolars in each quadrant; marsupials, three.

Molars -- The most posterior teeth in the jaws of most mammals are molars. As with premolars, they vary tremendously in size, shape, and function (some of this variety will be described below, once we build a vocabulary for it). The completion of their eruption is usually delayed until the individual reaches near adult size. Primitively, eutherians are believed to have had three molars, while marsupials had four.

Dental formulae -- The number of teeth of each type in an animal's mouth provides an important clue as to its evolutionary heritage. Mammalogists use a convenient shorthand, or dental formula, to summarize and present this information. Incisors are abbreviated "I," canines "C," premolars "P," and molars "M." Humans have two incisors, one canine, two premolars, and three molars, I2 C1 P2 M3, in each quadrant of their upper jaws. The numbers for each quadrant of the lower jaw are the same, and the general formula is written I2/2 C1/1 P2/2 M3/3. To arrive at the total number of teeth in the animal's mouth, sum these numbers (2+2+1+1+2+2+3+3) and multiply by two (=32). The formula for primitive eutherians is I3/3 C1/1 P4/4 M3/3 = 44 teeth; that for primitive marsupials is I5/4 C1/1 P3/3 M4/4 = 50 teeth. These numbers have often been reduced as teeth have been lost during the evolutionary history of mammals, but in only a very few cases (for example, some toothed whales) has the number of teeth increased.

Occasionally, other forms of dental formulae are used. These may indicate variation in the number of a particular kind of teeth within a species, they may attempt to show exactly which teeth are lost (for example, when a eutherian taxon is missing a molar, whether it the first, second, or third), or they may show the number of molars and premolars combined (often referred to as "cheek" or maxillary teeth) when the two can't be distinguished. 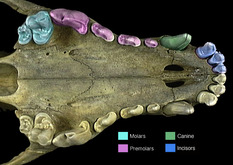 Kinds of teeth in an upper jaw