The American Cockroach, despite its name, is not native to North America but was most probably introduced via ships from Africa. It is currently worldwide in distribution.

P. americana is found in many different habitats. Although they generally live in moist areas, they can survive in dry areas if they have access to water. They prefer warm temperatures around 84 degrees Fahrenheit and do not tolerate cold. They die at temperatures below 15 degrees Fahrenheit. These criteria are often met in large commercial buildings such as restaurants, bakeries, grocery stores, food processing plants, hospitals, etc., where cockroaches may infest food-storage and food-preparation areas, basements, and steam tunnels. They are also found, although not as commonly, in residences. During the summer months, they can be found outdoors in yards and alleys. In the United States this is the most common species found in city sewer systems. They can enter structures by being brought in, coming up from the sewer system via drains, or occasional mass migration from other structures, dumps, etc., during warm weather.

Periplaneta americana adults are about 1 3/8 to 2 1/8 inches (34-53 mm) long. Their color is a reddish brown except for a submarginal pale brown to yellowish band around the edge of their pronotal shield (Pronotal shield - an expanded version of the top surface plate of the front segment of the thorax). Both sexes are fully winged. The wings of males extend beyond the tip of the abdomen, while females' do not. They are poor to moderately good fliers.

Early instars of P. americana nymphs are uniformly grayish brown dorsally, paler ventrally, and shiny. The cerci (cercus [pl. cerci]- One of a pair of dorsal appendages at the posterior end of the abdomen) are slender, and distinctly tapered from the base with length about 5 times the width. Later instars are reddish brown with lateral and posterior margins of the thorax and lateral areas (sides) of abdominal segments somewhat darker. The cerci are about the same as in the early instars. The widest segments are 2.5 times as wide as long. The antennae are uniformly brown.

The cockroach's walking pattern can be described as follows:

"The cyclic movement of a walking leg consists of two parts, the power stroke (also stance phase or support phase) and the return stroke (also swing phase or recovery phase). During the power stroke, the leg is on the ground where it can support and propel the body. In a forward-walking animal, this corresponds to a retraction movement of the leg. During the return stroke, the leg is lifted off the ground and swung to the starting position for the next power stroke."

Female P. americana produce many different sex pheromones to attract a suitable mate. Examples of these attractive chemicals include periplanone-B, periplanone-A, germacradien-9-one, cresol, phenol, undecen, hexenal, cyclohexanedial, hexanoic acid, dodecalactone, pentanone, and octanone. Sperm transfer occurs through the use of a spermatophore, which is sometimes eaten by the female because of its protein-rich nature. (Spermatophore- Capsule or packet enclosing sperm, produced by males of several invertebrate groups and a few vertebrates). Once fertilization has occurred, a female forms oothecae, or egg sacs. Parthenogenesis or egg production without fertilization does occur, but eggs either fail to hatch, or produce only a few nymphs. The ootheca is a dark reddish to blackish brown; about 3/8" (8 mm) long, with length about1.5 times the width. The female deposits her ootheca within a few hours or up to 4 days after it is formed. It is dropped or glued with an oral secretion to a suitable surface, usually in a crack or crevice of high relative humidity near a food source.

The development of P. americana is hemimetabolous, meaning there is no major metamophosis. The nymphs look very much like small adults.

Nymphs are given no parental care; hatchling roaches are left to fend for themselves. The nymph grows by molting and it goes through about 13 molts before it reaches the adult form. The next to last nymphal stage has wing pads, but only adult cockroaches have wings.

Cockroaches spend 75% of their time squeezed into narrow cracks and crevices for safety. The most preferred harborages are those of the proper size that are located near food and water sources, and which are warm and have a high relative humidity.

Roaches themselves will eat anything, including one another. There is very little organic material that a cockroach won't eat. The list includes bark, leaves, paper, wool clothes, sugar, cheese, bread, oil, lemons, ink, soap, flesh, fish, leather, other roaches (dead or alive), or their own cast-off skins and egg-capsules. Some of these items, such as cellulose, can not be digested by normal means. However, like cows and other grazing animals, cockroaches have a symbiotic relationship with a bacteria that allows them to digest such substances. Although they feed on many kinds of food, they show a particular fondness for fermenting food.

This species is harmful to humans, and its impact on human health and economies is substantial. The greatest potential harm is an agent for disease transmission. American cockroaches can transmit a variety of bacterial diseases by feeding on contaminated material, and then contacting people's food. Cockroaches are also the fourth most common allergen. 50-60% of all atopic and asthmatic people show intense reactions to cockroach extract. Sensitivity to cockroach allergens may be as high as 79% in asthmatic children in severely infested homes. The species also has a psychological impact on humans, causing anxiety and stress due to embarrassment and physical invasion (Bio-Serv 1998; Cochran 1980).

This species is considered a pest, and there are no efforts being made to conserve it.

As far as being a food source, cockroaches have a number of natural enemies. Spiders sometimes hunt them but are often too slow to catch the quick cockroach in a natural environment. Frogs, toads, and salamanders are more effective predators, and in Bermuda lizards are kept in the house to devour roaches. Finally, human beings from Australia to China to Japan have been known to eat roaches for nourishment or for medicinal value.

There is a picture of the American Cockroach at the following URL: 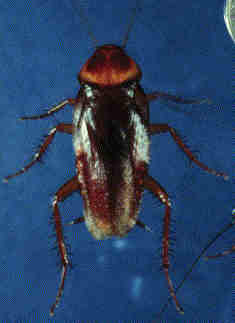 There is a 5-step process for the control of roaches.

living in sub-Saharan Africa (south of 30 degrees north) and Madagascar.

living in the Nearctic biogeographic province, the northern part of the New World. This includes Greenland, the Canadian Arctic islands, and all of the North American as far south as the highlands of central Mexico.

living in the southern part of the New World. In other words, Central and South America.

living in the northern part of the Old World. In otherwords, Europe and Asia and northern Africa.

having body symmetry such that the animal can be divided in one plane into two mirror-image halves. Animals with bilateral symmetry have dorsal and ventral sides, as well as anterior and posterior ends. Synapomorphy of the Bilateria.

having a worldwide distribution. Found on all continents (except maybe Antarctica) and in all biogeographic provinces; or in all the major oceans (Atlantic, Indian, and Pacific.

forest biomes are dominated by trees, otherwise forest biomes can vary widely in amount of precipitation and seasonality.

referring to animal species that have been transported to and established populations in regions outside of their natural range, usually through human action.

the area in which the animal is naturally found, the region in which it is endemic.

found in the oriental region of the world. In other words, India and southeast Asia.

rainforests, both temperate and tropical, are dominated by trees often forming a closed canopy with little light reaching the ground. Epiphytes and climbing plants are also abundant. Precipitation is typically not limiting, but may be somewhat seasonal.

A terrestrial biome. Savannas are grasslands with scattered individual trees that do not form a closed canopy. Extensive savannas are found in parts of subtropical and tropical Africa and South America, and in Australia.

A grassland with scattered trees or scattered clumps of trees, a type of community intermediate between grassland and forest. See also Tropical savanna and grassland biome.

A terrestrial biome found in temperate latitudes (>23.5° N or S latitude). Vegetation is made up mostly of grasses, the height and species diversity of which depend largely on the amount of moisture available. Fire and grazing are important in the long-term maintenance of grasslands.

Help us improve the site by taking our survey.